The Scarred Past of an Adina Grandfather Clock

As a Brisbanian in 2011 two events will resonate with me forever; the Queensland Reds winning the Super 15 Rugby Championship, and of course, the floods that devastated our city. As much as I would love to recount the moment at Suncorp Stadium that I stood shoulder to shoulder with 53,000 cheering Queenslanders urging Will Genia on to score an epic try to seal the game, that would not have much to do with Adina. However, the floods and Adina are a very different story. It is one that starts in the leafy western Brisbane suburb of Indooroopilly with a friend and her grandfather clock.

No real need to recount the devastation that occurred in the Summer of 2011. This is a story of what came after.

We pulled up outside Tanya’s house after passing many streets of devastation with our eyes seeing but not believing what they were taking in. Tanya had lived here for the past 6 years, celebrating her 40th birthday only 8 months earlier with a cracking party. She also treated herself to further celebrate this milestone with the purchasing of an Adina grandfather clock. 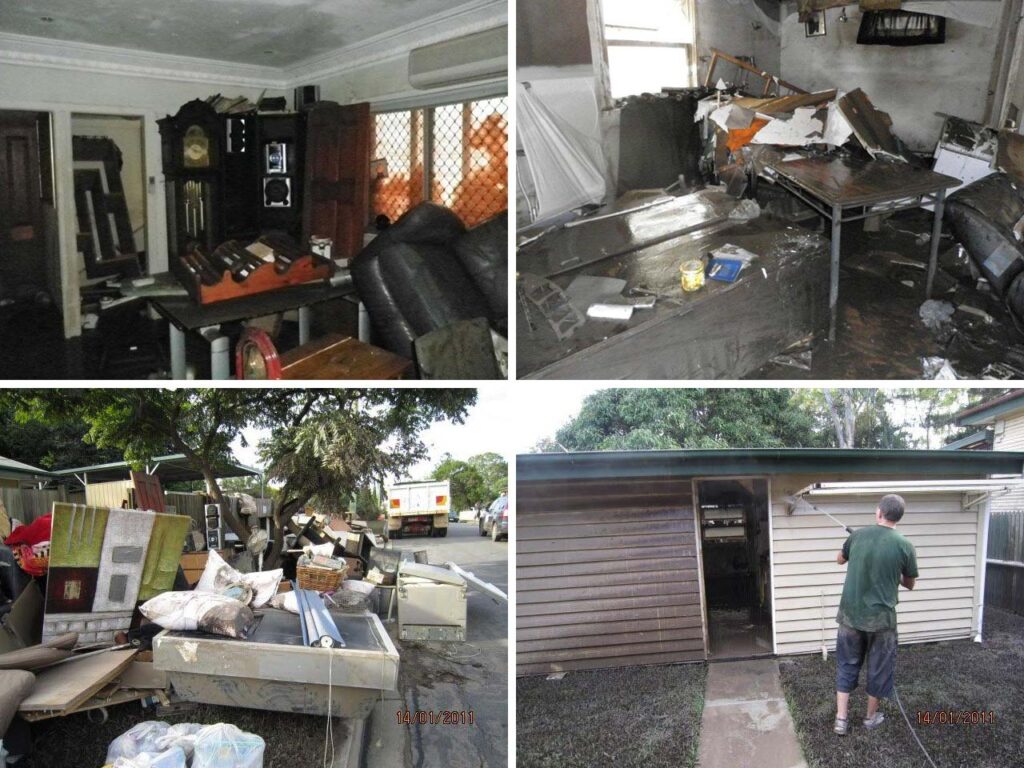 With the flood waters finally receded, the carnage inside her home had to be attended to. The vast majority of her belongings had been carried and dumped unceremoniously out on the front street. Not so her Adina grandfather clock.

The first thing I did on arrival was clean out the bath, and refill it with fresh, clean water. The aim: to pull out the grandfather clock movement, and flush any gunk out. The movement we use in our grandfather clocks is the German made Hermle & Son, renowned for its reliability and longevity. What this one had been through in its first 12 months was going above and beyond. The brass weight canisters, pendulum and tubular gongs also needed attention. Soon, they too found themselves fully immersed again. But this time in fresh clean water.

I now turned my attention to the solid timber case. Could something that was made from timber and had been completely submerged in water for a couple of days survive? I knew the stunning case was made from solid Philippine mahogany which had been hand carved. Was this incredible timber workmanship destined to endure? Only one way to find out. 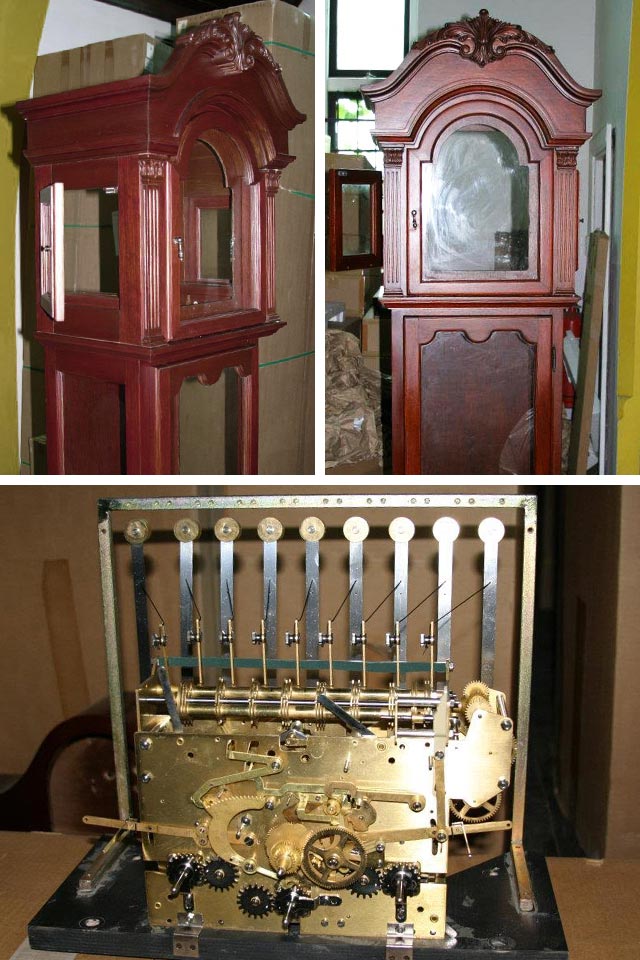 With the movement and accessories removed, I recruited a couple of volunteers to assist me getting the 190cm case outside. In the process the case slipped, knocking into the door jamb. Was this an ominous sign of things to come? Furious with myself, I washed down the case again with fresh water, before transporting it back across town. The aim was to store the case in a cool dry environment to let it slowly dry out. Only time would tell if it would survive that process.

The same could be said for the movement which now needed to be fully cleaned, serviced and re-oiled. We even sourced from the rifle industry a penetrating spray designed especially for the protection of metal. After the movement received the expert attention it deserved, it was soon up on a testing rack doing exactly what it was designed to do. The case had been left to its own devices for about six months. Drying out ever so slowly with furniture oil being applied weekly to ensure the case didn’t crack.

Almost twelve months on, with her home completely refurbished, the day arrived to reinstall the sole surviving piece of Tanya’s furniture from that fateful week. Since then, the clock has been moved multiple times. First to a new home here in Brisbane, then shipped to Canada where it lived a rocking life in a float home on Vancouver Harbour. Next was shipped again, to Houston Texas, and finally to the north of British Columbia, to the shipping port of Prince Rupert on the Alaskan border.

The grandfather clock scars I was so annoyed about at the time, are now endeared by the owner.  They tell a story of enduring quality and of a history lived. If that was the first ten years what do the next ten hold?

About the Author: Adina Watches